Today, we’ll look at hardware and software and how they relate to a computer’s memory, CPU, and other components.

We will learn the following today:

A collection of programs and procedures that perform tasks on a computer is referred to as software. Software is a set of instructions that affect the state of the hardware in a computer. There are three types of software in general:

Software is generally the first thing that springs to mind when you think of computer science. What developers actually code is software. After that, the programs are installed on a hard drive.

Anything physically attached to a computer is referred to as hardware. Your monitor, printer, mouse, and hard disc, for example, are all hardware components.

Hardware and software are in constant communication with one another. The software “tells” the hardware which tasks to complete, and the hardware allows them to be done.

Note: A hard drive, display, keyboard, memory, motherboard, CPU, power supply, and video card are all required for most computers to function.

The Central Processing Unit (CPU) is a physical component of a computer that processes data. It gets data from the main memory, processes it, and then returns the modified data back in. It is divided into two parts:

The data flow from and into the main memory is controlled by the control unit (CU).

The data is processed by the arithmetic and logic unit (ALU).

John von Neumann designed this computer architecture in 1945, and it is still used in most computers today. The Von Neumann architecture is built on the idea of a computer with stored programmes. Both programme and instruction data are stored in the same memory.

The following elements make up this architecture:

The input unit collects data from the real world or from an input device and turns it into bytes streams. A keyboard, mouse, microphone, camera, and USB are all common input devices.

The output unit, though, takes the processed data from the CPU’s storage and displays it in a human-readable format. Monitor screens, printers, and headphones are all common output devices.

The data must be saved in the memory after it has been retrieved and transformed. The physical memory space is represented by the storage unit or memory. It’s broken down into byte-sized storage areas.

A storage device includes millions of bytes of memory that can be used to store anything on our computer. We use a circuit called a latch to save a bit of data in computer memory. A latch stores the previous input unless it is reset. We may make a circuit with the following components:

The hardware memory of a computer is made up of various components. The physical memory space within a computer is known as main memory or random access memory (RAM). It stores data and instructions that the CPU may access directly. To store all of your data, computers typically have a limited amount of main memory.

That’s when you’ll need to employ secondary storage. Secondary storage is used to supplement main memory by storing data and programs that aren’t needed right away.

A computer can only process binary data, which consists of a series of ones and zeros. The computer’s language is binary. Computer instructions are likewise stored as ones and zeros that must be decoded and executed by the computer.

An assembler is a program that converts assembly language into machine language. The code snippet below is an assembly program for the X86 processor that produces “Hello, world!” on the screen. 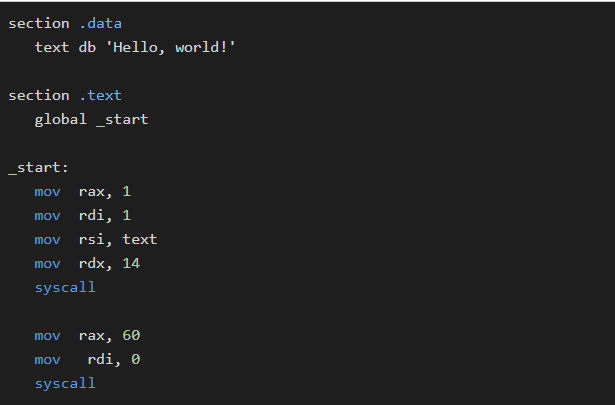 Because it resembles machine language, assembly language is referred to be a low-level language. High-level languages were established to address these flaws.

Programming languages enable us to develop powerful, complicated, human-readable programmes without a significant amount of low-level instructions. The following are some of the most well-known high-level languages:

How do you go about designing software?

The process of converting specific requirements into a suitable program utilizing code and a high-level language is known as software design. We must appropriately design a program and system that will achieve our objectives.

Software design allows developers to think through all of the components of their code and system. There are three levels of software design:

What should I study next?

Congratulations! You should now have a good understanding of computer hardware, software, and components. These are necessary for your development as a computer scientist. You should study about the following topics as your next step on this journey:

Check out our computer science courses to get started with these fundamentals to venture in the field of computer science. From storage to processing and beyond, you’ll study how a computer system handles complex tasks.